The time between the last normally scheduled Top Gear of the Clarkson era, and the premiere of The Grand Tour.

Now in the past, that time—that absence—seems so short. In the middle of it, it seemed endless.

I recognize how absurd it is to talk this way about a television show. Nonetheless, this is the TV show. The one I would schedule my life around. My favorite, bar none.

I eulogized Top Gear. I spent 75 minutes discussing it. Hell, I eulogized a fan site for the show. We threw parties to celebrate it. My license plate on my car is an homage to it.

The work of these men has meant a lot to me, for many years.

This past Friday, the first episode of The Grand Tour was released on Amazon Prime Video.

The same three hosts, but a new name, a new format, a new corporate overlord.

I’ve been looking forward to this for six months now. I was so amped to see this new creation that perfection was not possible.

Damn if they didn’t come close.

Look. At. This. Opening.

No, seriously. Look at Clarkson again: 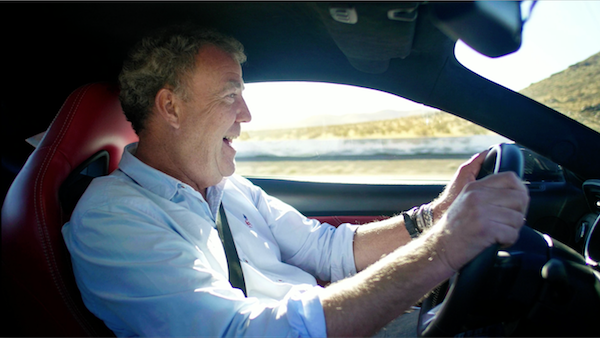 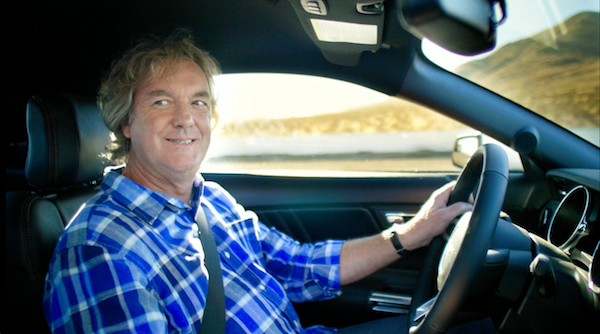 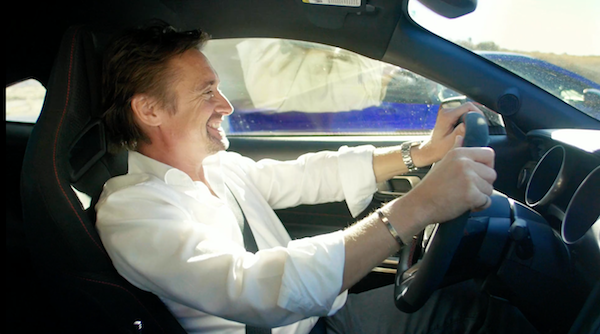 The Grand Tour opens with Clarkson making a walk of shame out of the BBC headquarters in dreary London. The musical accompanyment begins as simply a piano, forlorn, lovely, understated. We follow Clarkson to Heathrow, boarding a flight to Los Angeles. He picks up his rental car, a blue bespoke Mustang, in a parking garage. Leaving LAX, on a bright and sun-shiny day, the vocals in the background accompaniment start:

I can see clearly now; the rain is gone. I can see all the obstacles in my way…

On the road is when we see the scene above. Clarkson is met by his co-hosts, in matching red, white, and blue Mustangs. Mustangs that, like the wild animals they’re named after, are running free.

Driving in the desert, at speed, amongst a flotilla of cars of all shapes and sizes, our three heroes arrive at what appears to be a music festival—Burning Van—in the middle of nowhere. Suddenly, the question begins to make sense.

As the once-mellow opening song reaches a crescendo, our hosts emerge from their cars amongst a horde of screaming fans. It is somewhat self-indulgent, only getting worse as eight screaming jets do a low-altitude fly by over the crowd. And yet, it’s so… them. I can’t help myself smiling even larger.

The opener was perfect.

I have some problems with the first episode. Aside from the opener being a bit over the top, I felt like the segments in the tent needed work. The hosts, to my eye, looked visibly nervous. Some of the jokes, such as the Air Force and celebrity guests, fell very flat, and went on far too long.

By and large, though, I thought this first episode of The Grand Tour was great. It focused largely on cars, which is something Top Gear got dinged for forgetting to do toward the end of its run.

The title of the episode (we’re doing episode titles now, apparently) is reference to the boys finally getting to test “the holy trinity” together. We have seen the 918, P1, and The Ferrari pit against each other. Finally. Having the BMW M2 as the introduction to the “Eboladrome” didn’t hurt this BMW owner’s feelings either.

Top Gear The boys are back, and I’m so excited to see what comes next.