Let's Switch that Dock for Something Smaller
Saturday, 17 March 2018  ⚓

UPDATE 2018-04-02 20:00: Though I used this adapter with a non-Nintendo power supply with Switch software 5.0.0, I’ve heard many reports of these adapters bricking Switches on 5.0.0 and 5.0.1. I can’t tell if this is due to using foreign power supplies, or because of the adapter itself, but, use with extreme caution.

A few weeks ago I was browsing Twitter and saw that Scott Hanselman had posted about the Nintendo Switch over on his blog. Scott’s very informative post details some of the travel accessories he likes to use with his Switch. Among them was the thing I have been waiting for: a portable HDMI adapter.

The Nintendo Switch is magical in that you can… ahem… switch between handheld play and TV play by dropping it into a special dock that comes with the system. The Dock Set is hilariously expensive at $90, but even more egregious is that the dock doesn’t collapse in any way. It’s not particularly heavy, but it’s big. Bringing all that along with me when I travel is not fun.

However, the Switch’s one port (sound familiar?) is a standard USB-C port. So, when I first got it, I tried to use my USB-C → HDMI adapter that I use with my MacBook. No dice. I had assumed that there was some sort of “DRM” within the dock that allowed only it to output HDMI.

Scott found what I was looking for: a USB-C → HDMI adapter that works with the Switch! I just got one, and confirmed that it does work on my TV at home with my Switch (software version 5.0). Moreover, the dongle works great with my MacBook, even having a more reliable USB-A connection than my previous adapter. 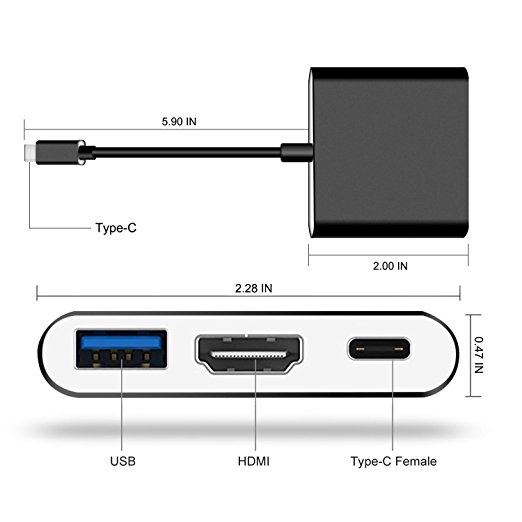 Now, I can replace my previous adapter with this one, and use that with either my MacBook or my Switch. I can plug my Switch into, say, a hotel room TV without having to worry about bringing the entire dock. Moreover, the Apple 29W USB-C Power Adapter seems to be enough to power the whole setup.