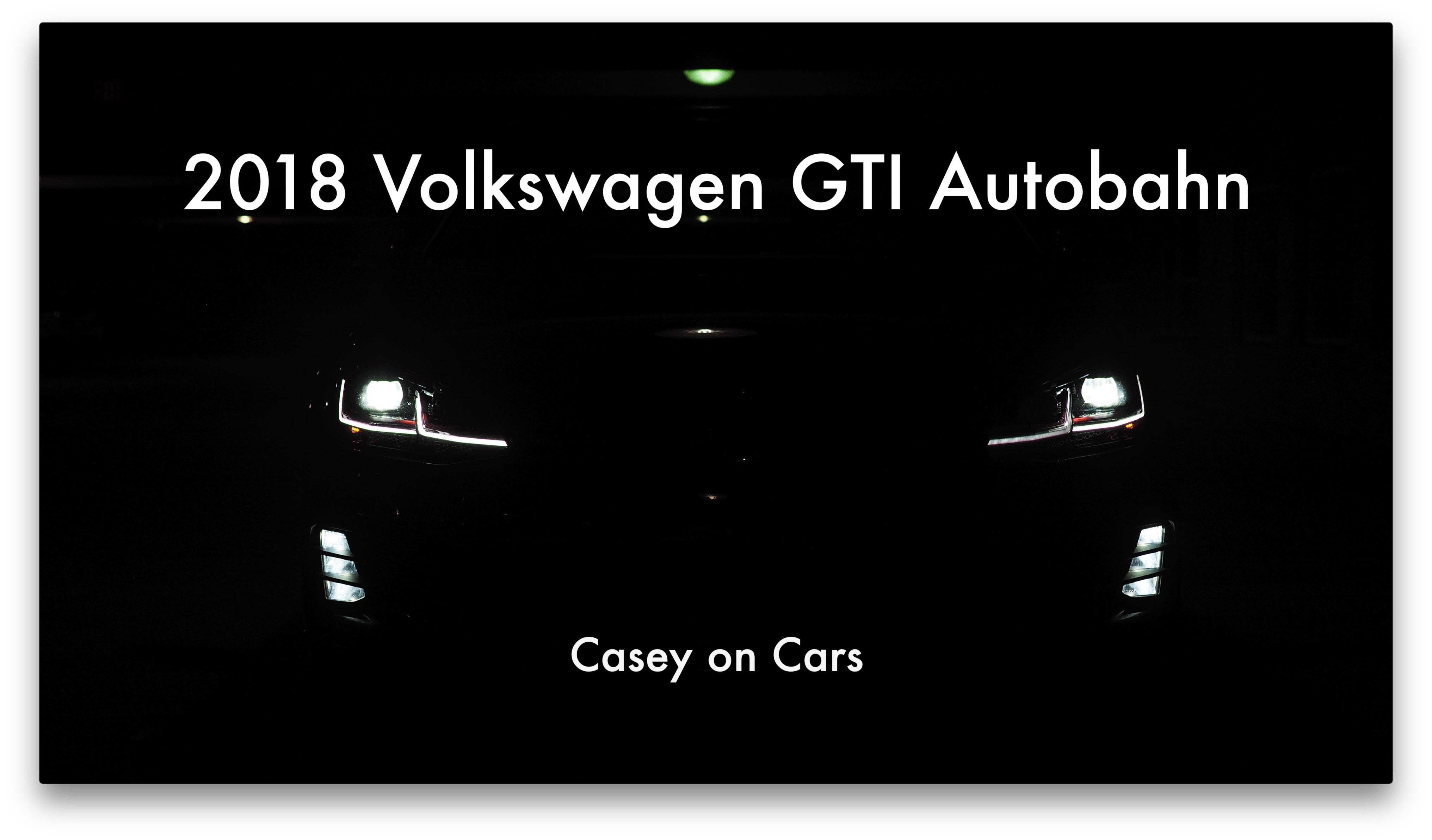 Often times, the best — but also worst — problem in the world is a difficult choice.

As I write this, 40mm versus 44mm is one of those choices.

If you’re very lucky, it’s something else entirely: GTI or R.

Volkswagen offers several different flavors of its all-things-to-all-people Golf line. Many of them I find uninteresting. Two of them are not only interesting, but compelling: the GTI and the R.

How do you choose between them? At first glance, it’s a very difficult choice to make.

Two very powerful, very fast, very comfortable, very good hatchbacks, both of which seem like they should cost more money than they do. It’s a tough choice.

This would not be a Casey on Cars review without a video. You can find my video review of the GTI on my YouTube channel. I’d love if you take a few minutes to watch it:

Too Much of a Good Thing

In the Golf line, there are several different models:

The space between the models varies depending on which pairing you’re comparing. With the GTI and the Golf R, the differences are slight. Almost imperceptible at a glance.

In my review of the R, I wrote the following:

The Golf R is, on the surface, little more than a GTI cranked to 11. However, upon closer inspection, it’s quite a lot more than that… while also being less than that.

Having spent a week with the GTI, I stand by the above.

At a glance, there are a few major changes from the GTI. The Golf R:

As it turns out, there’s a lot more space between the two cars than I originally thought. 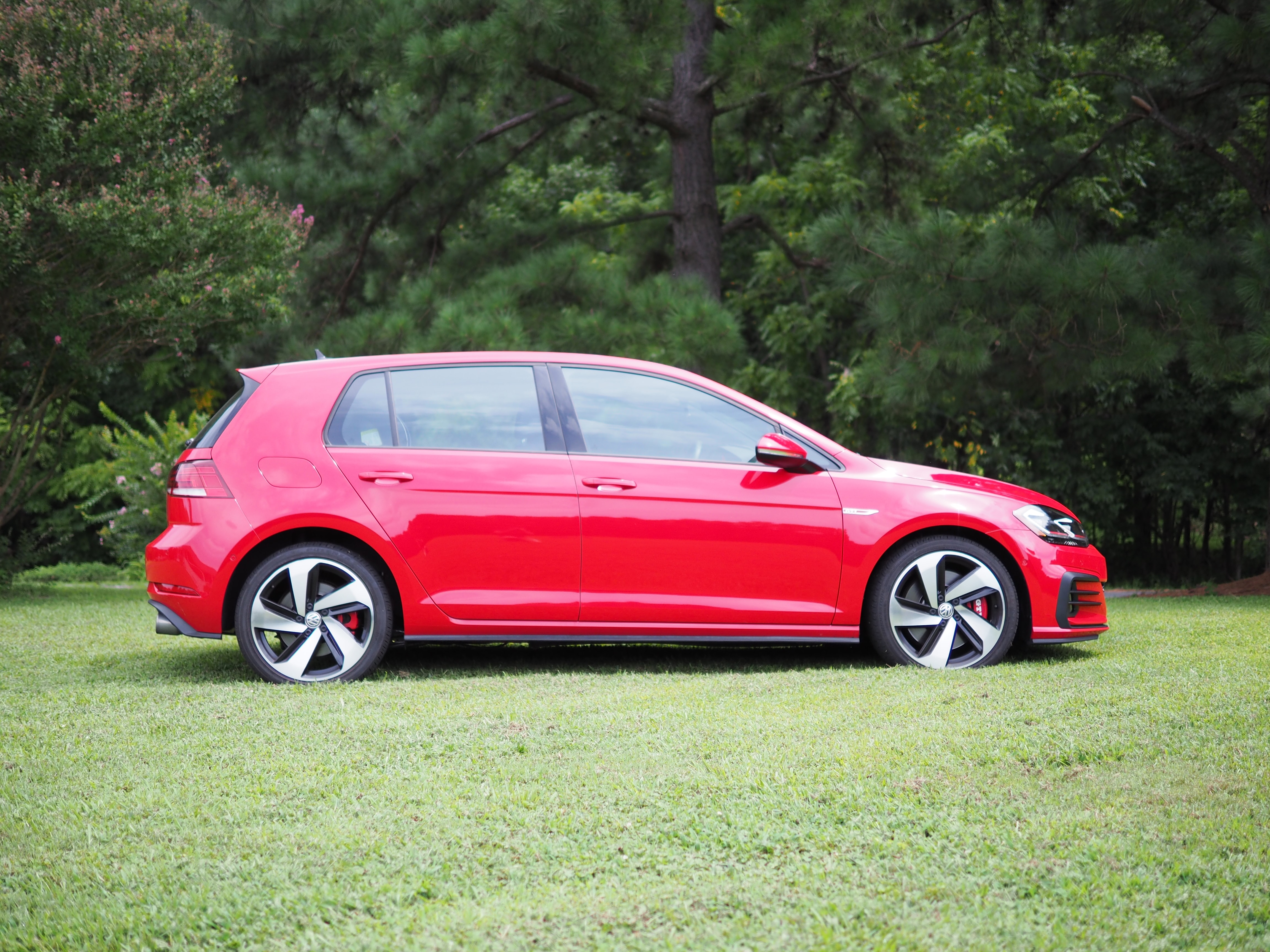 The particular GTI I was able to spend time with was a Autobahn, which is the highest trim level available on the GTI.

The GTI S is the base model; if you opt for the SE, you get:

Opting instead for the Autobahn also gives you:

The Autobahn is considered fully loaded; the only options you really get at the Autobahn trim level are exterior color and transmission. 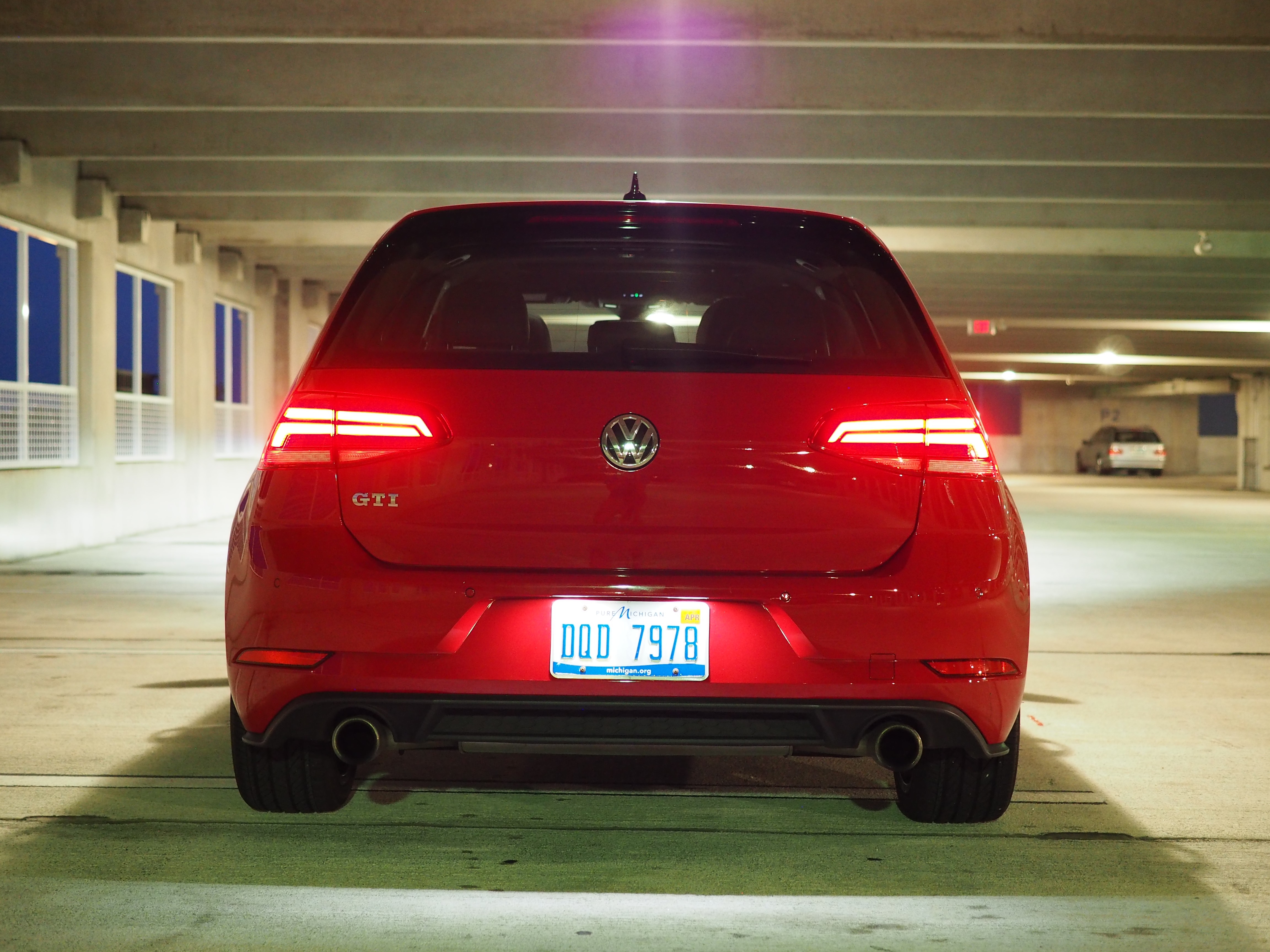 The particular GTI Autobahn I was given was equipped with Volkswagen’s direct shift gearbox, which is their dual-clutch automated manual transmission. It’s also a $1100 option. To oversimplify, the DSG is sorta kinda two separate manual transmissions that are interleaved. There are two clutches — one per transmission — which allows for expected shifts to be lightning-fast.

I’ve said for years, that I much prefer DCT/DSG transmissions over traditional automatics. Though I’ll always prefer to row my own, it’s clear that won’t be an option for long. A DCT/DSG is as close as one gets while still having only two pedals.

As discussed in my Giulia review, the ZF 8-speed is truly phenomenal. So good, in fact, that I think I prefer it to the DSG in the GTI. Which is a deeply uncomfortable conclusion I never expected to come to.

The problem with the DSG in the GTI is that it never lets you forget that you are driving a hack. It’s a phenomenally impressive hack, but ultimately, still a hack. It’s taking a manual transmission and trying to bend it to be something it really isn’t. It’s right there in the name: manual transmission! It shouldn’t be automated!

This is most easily exemplified by trying to take off, from a stop, with a moderate quickness. In the ZF, it would behave exactly as I expected: a quick-ish launch, then lots of acceleration. In the GTI, it was different. I got a standard, more leisurely launch, and then once the computer felt like the clutch was done slipping, it would lay on the throttle.

This never felt really natural, and always frustrated me, at least a little bit.

Otherwise, the DSG was great. The only other foible I really noticed was that it allowed you to request a downshift into first gear at speeds where you probably shouldn’t. It was never smooth, to the point that I wish the transmission just ignored my requests. I eventually trained myself not to ask for a downshift to first, but it took me a while. 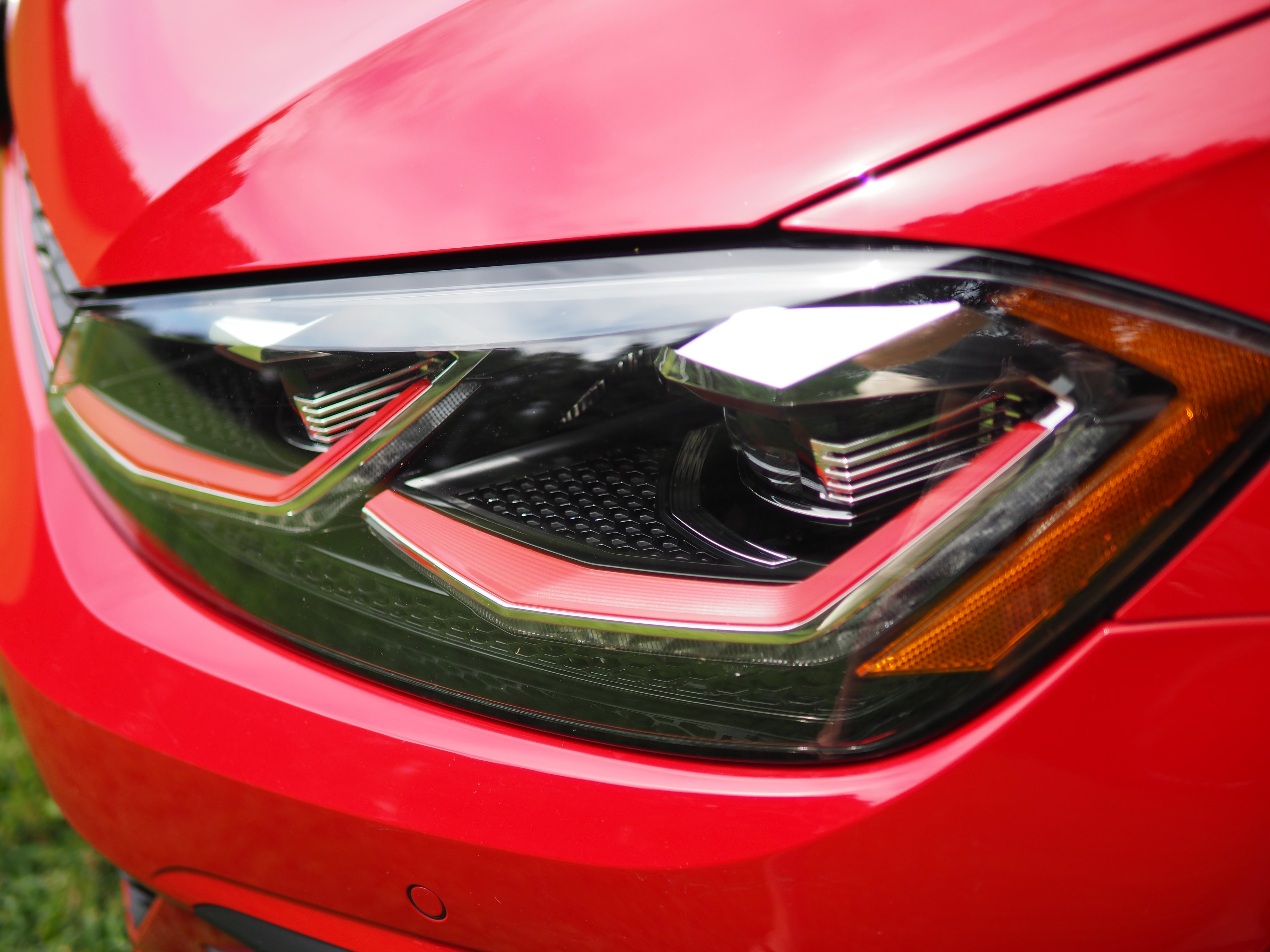 Though the DSG left me wanting for the magical ZF 8-speed[2], all in all I liked it a lot. Regardless of the transmission the GTI is equipped with, it was stunningly quick.

I quite expected to dearly miss the speed of the R. I expected the GTI to be noticeably — if not considerably — slower.

It turns out I was right, but not for the reason I expected.

The GTI makes way, way too much power for the front wheels.

Naturally, this could come down to the Bridgestone tires that the car was equipped with. A friend also has a 2018 GTI Autobahn, but with aftermarket tires, and he swears it’s a totally different car. But he concedes it doesn’t make the traction problems go away; they’re simply decreased.

When the GTI digs in, and connects, it’s nearly as fast as the R. Fast enough that my butt dyno couldn’t really tell much of a difference. However, with almost any steering input, or any amount of moisture on the road, all bets are off.

On the plus side, however, the limited slip differential in the GTI must be powered by unicorn tears, because it was magical. I never felt any torque steer, which I remain surprised by. The last time I drove a truly powerful front wheel drive car — my dad’s SRT-4 — it torque steered like its life depended on it. I got none of that in the GTI. 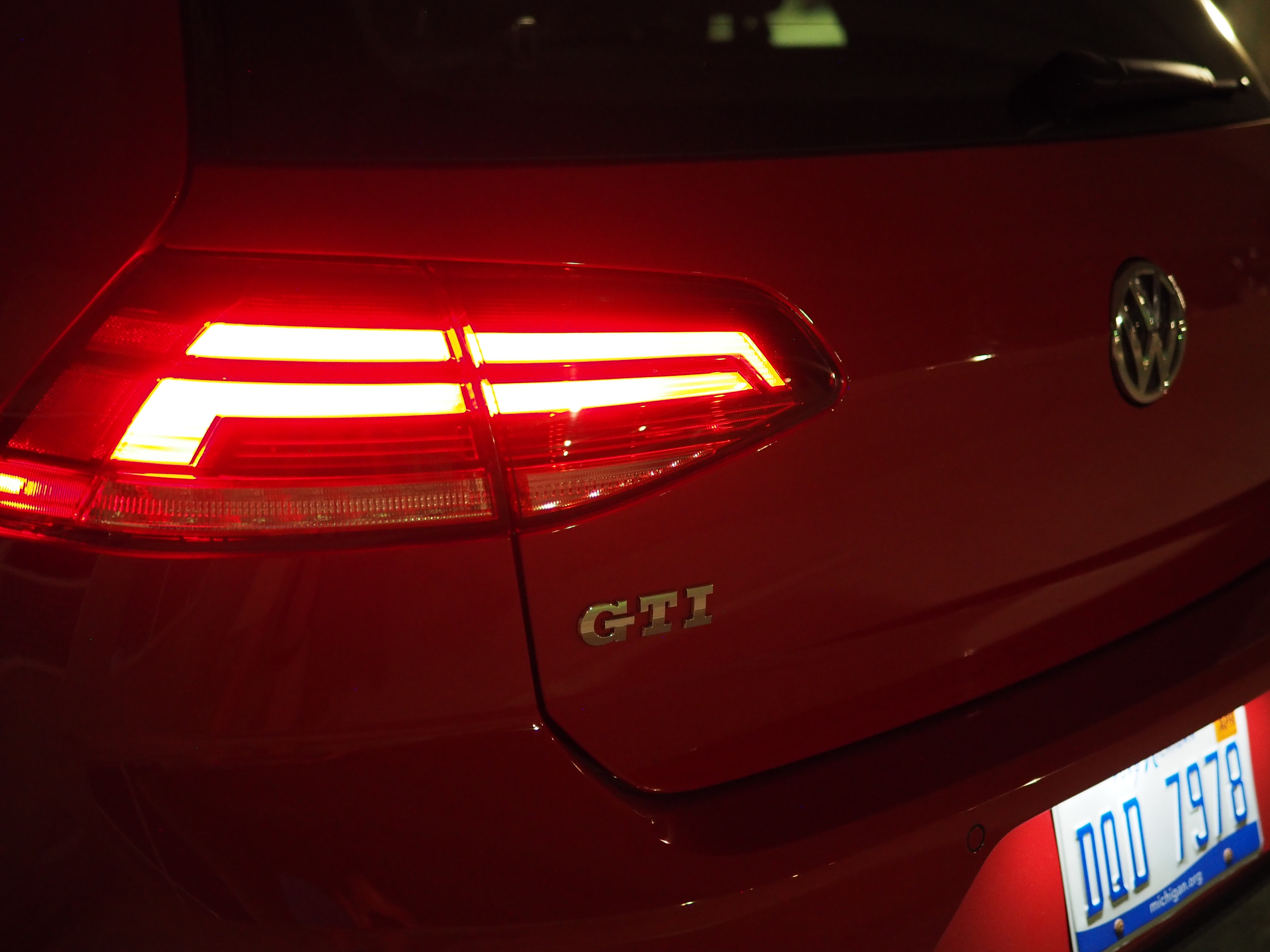 The GTI has its problems, but one thing I consider to be inarguable: a Volkswagen GTI — in any trim — is incredible value for money. The interior fit and finish feels like a car north of $40,000. The GTI is well equipped, particularly in Autobahn trim. All of this car can be had for $37,065.

However, a base GTI S starts at $26k. That’s already a ridiculous deal, but from what I’ve been told, dealers are willing to make deals on GTIs. It’s not unheard of to get a GTI for around $20k. Brand new.

I can’t imagine a better deal for a car that can do almost everything, and do so with such gusto.

When I reviewed the R, I had said that I was looking to unload my BMW, and replace it with either a GTI or an R. Having had a week with the R, then a week with the GTI, I have reached a conclusion.

The GTI is legendary. People have been raving about GTIs since before I was born, and for good reason. I’ve heard from everyone — those in the know and those who are not — that it’s the ultimate all-things-for-all-people car. And everyone is right; the GTI really is. Bang for the buck, value for money, it’s the best I’ve ever driven. By a mile.

However, I hated the GTI.

Thus, a couple of weeks ago, this happened:

The GTI is an incredible deal, and a phenomenal car. I would happily drive one. But to spend my money, I wanted to get the car that best suited my driving style. So we got a Golf R.

I couldn’t be happier.

At the end of the day, I put my money where my mouth is, and I did my part to save the manuals. Will you do yours?