I got news this morning that my friend Jason Seifer had passed away suddenly.

Jason was like nobody I’ve ever met. Which is an odd thing to say, since we had never actually met in person. Nevertheless, I immediately started to cry upon hearing the news; an odd thing to do for someone who, on paper, was just a voice in my head.

Jason Seifer was one of two co-hosts of one of my favorite podcasts of all time, IRL Talk. He, along with Faith Korpi, were a duo that had both immeasurable and also indescribable chemistry. They were in so many ways the same, and yet in so many ways so very different, I enjoyed every moment of IRLTalk, and its predecessor, Geek Friday.

Let me take a paws to describe a small part of why Jason is so important to me.

Long before I was a podcast host, I was a podcast listener. I got into podcast consumption by wanting to hear what an old childhood friend of mine was doing. Once Build and Analyze started, that led me to Hypercritical, The Talk Show, and most things that Dan Benjamin touched. Including Geek Friday.

Suddenly, there was a podcast with a woman co-hosting. I immediately asked Erin to listen, as I figured she’d be more likely to enjoy a show that was only obliquely about the nerdy stuff I like, but instead about nerding out over anything.

We listened to every episode together, and when Dan left, we weren’t sure what to make of his replacement. This “Jason Seifer” fellow was… a tornado.

It didn’t take us long to fall in love with this rebooted Geek Friday, and things only got better when it eventually became IRLTalk.

I longed for longer car rides with Erin, so we could finally have some time together to listen to IRLTalk. We couldn’t wait to hear what ridiculous pranks Jason pulled, nor what ridiculous puns he would commit to wholeheartedly. I’m still amazed by his long troll of singing George Michael’s Faith to Faith without her even knowing.

Erin and I bonded over IRLTalk, laughing along with Faith and Jason. We were in hysterics the whole time.

IRLTalk exposed Erin to podcasting in a way I was never able to before. It was incredibly convenient not too much later when I started recording my own show with friends.

Though Erin and I were lucky enough to meet Faith in person in 2014, we were never lucky enough to meet Jason. Nevertheless, Jason and I stayed friends after IRLTalk ended; including him sending me an utterly preposterous Christmas card portrait this past year. And this gem, received only last month, for my birthday on St. Patrick’s Day: 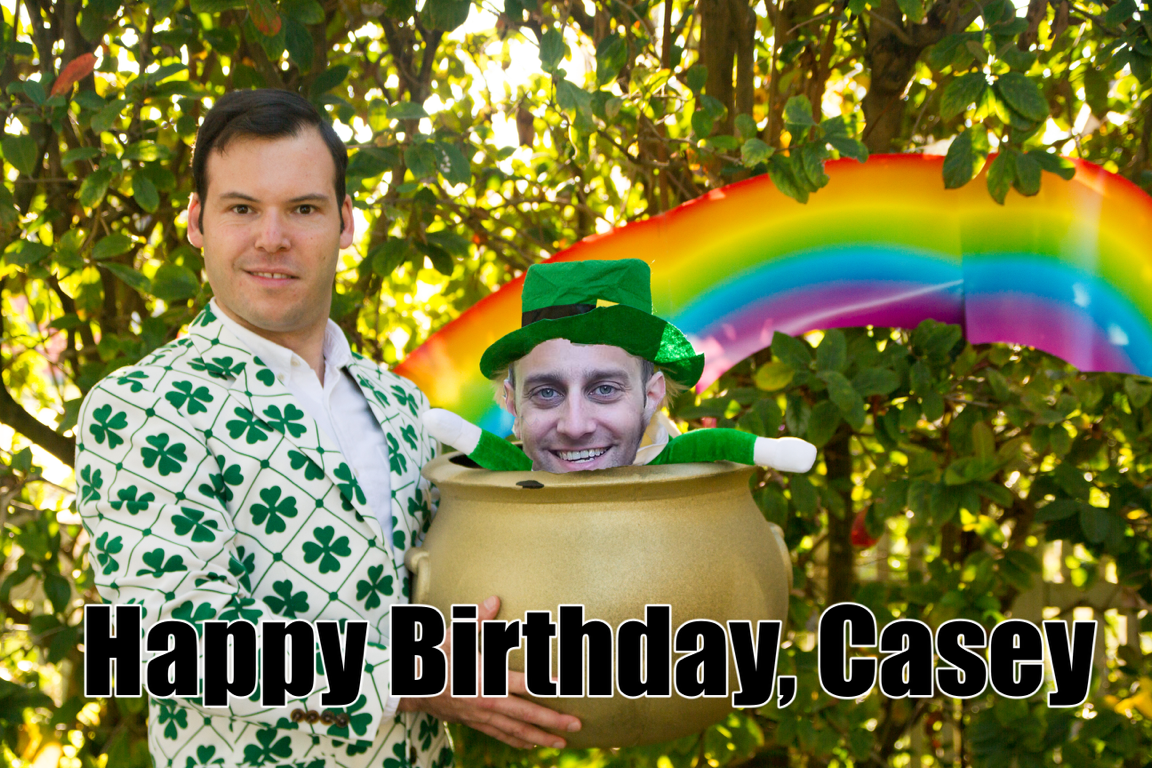 I’m going to miss you, Jason. You brought a unique joy to my life that can never be replaced.