As someone who does not drink fussy coffee, fizzy water, nor have a clicky keyboard, I had an emptiness in my life. Clearly, I needed something to be fussy about.

On 28 August 2013, everything changed. I backed the Neat Ice Kit on Kickstarter.

24 hours after that, I had my first brick of ice: 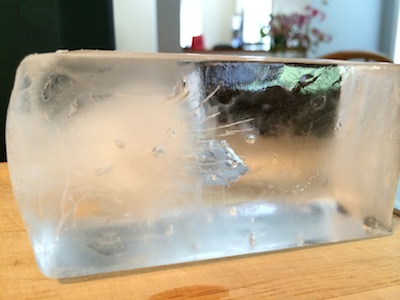 As you can see, half of this brick is cloudy and gross. But half is, as the guys at Studio Neat say, a big-ass crystal clear ice cube.

As you can see in the Vine below, a few minutes later I had a beautiful, crystal clear ice cube to pour my vodka over.

Over the last week I’ve been messing with my routine, in order to try to get the most reliable, well, big-ass crystal clear ice cubes.

While nothing particularly earth-shattering, here’s a few tips:

At the end of the day, I’m unconvinced that making my drinks with this fussy ice makes them taste any better. But the ceremony of forming the ice in advance, then splitting it when I want my drink, is really enjoyable. It’s rather silly and a bit of a waste of time, and I love it.

Neat Ice Kits are not currently available for sale, but you can sign up to be e-mailed when they are.