My cohosts on both shows and I are often asked about our podcasting rigs. To be honest, there’s not a lot of magic behind what we do, other than really giving a crap. Much like a good photographer, a good podcaster isn’t defined by their equipment. Doubly so once you’ve reached something nicer than a phone’s camera, or a phone’s earbud microphone.

I’m not trying to justify any of this as the right nor best approach. I’m not saying that for your voice either of these microphones makes sense. I’m simply answering the question “What do you use?”. 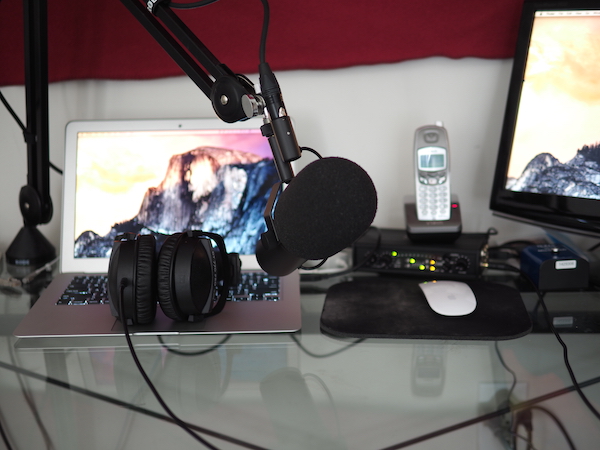 Beginning with ATP #92, I am now using the following, which Marco recommended to me:

I also continue to use a couple items from my original setup:

For nearly the first two years of my podcasting career, I used a different setup at home. This has now been demoted to my mobile rig, in the rare occasion when I want to record while traveling.

If you’re just getting into podcasting, I can’t recommend the Rode Booming Kit enough to get you started at home. You’ll sound professional without (completely) breaking the bank.

An alternative, which John uses and the Wirecutter recommends, is the Shure PG42-USB. It’s basically the same money as the Rode Podcaster, but it comes with a shock mount, pop filter, and desk stand.

For me, this is my mobile setup:

The software I use isn’t that exciting. As many others do, I wish there was something purpose-built for podcasting, but there isn’t yet.

When doing my side of the edit (more on this below), I simply use QuickTime Player and TextEdit to take notes.

Generally speaking, for ATP, the workflow is as follows:

Wednesday Night: We record the show

Thursday: Marco merges the tracks and does a rough edit. This includes cutting out crosstalk. Sometimes cutting cross-talk means muting one of us. Sometimes it means spacing out what we say so instead of being simultaneous, we’re now taking turns, thanks to the magic of editing.

Marco will also insert sound effects for swear words, as well as occasionally add some editing flair all his own. He will cut whole segments that are uninteresting or not worth including in the released episode. Finally, he adds the theme song and picks out pre- and post-show clips, and adds them in the appropriate places.

Friday Morning: I listen to the show, at 1x, and take note of any edit points I think he should consider. This is usually background noise like someone sipping a drink, or dropping something. Very occasionally, I’ll ask him to edit for content, on behalf of any one of us.

While I’m doing the edit, I also write a draft of the show notes in Markdown using Squarespace’s editor. We really do host ATP’s site on Squarespace. If you’d like to try it out, you may find that offer code ATP will save you 10%.

Friday Afternoon: I send my edits to Marco, who makes final changes. He’ll upload the file to Libsyn, make any changes to the show notes, and then post the episode.

For Analog(ue), we follow the same general workflow. We record on Thursdays, I listen to the copy of the show from Call Recorder, and then get edits to Myke by Sunday morning. He’ll then splice together the pieces and post the show by Sunday evening. Myke also tends to handle curating the show notes, as he’s impossibly fast at getting links together while we’re talking.

Like I said above, nothing here is really magical. The magic for both shows is giving a crap.

Many of my podcasting friends think we’re nuts to insist on going through the episode and trying to cut out cross-talk, odd background noises, et cetera. They may be right — it may not be worth all the extra time and effort. I admire the fact that, in many cases, they can post their shows within a couple hours of airing. They give a crap about timeliness.

To us, though, we see it differently. We don’t give (as much of) a crap about timeliness. We’d rather have something that sounds the way we want it to. So, we take the time to do what amounts to three edits: one to splice things together, one to mark any garbage points, and one to clean up the garbage. I can honestly say that I think ATP and Analog(ue) sound the best among their peers. You may never be able to tell the difference, and that’s okay with me.

Each side has its advantages; it’s up to you to decide what you think is best for you and your show.